Crude oil is a mixture of hydrocarbon molecules (carbon and hydrogen atoms only -discussed in the next section).

The soft tissue of plants and animals which had died millions of years ago was changed under high pressures and temperatures (from layers of sediment) to form crude oil.

It is not very useful in its crude state so it gets purified using Fractional distillation which is the separation of molecules into different fractions based on their boiling points. Longer chain hydrocarbons will have higher boiling points due to the increased Van der Waals forces holding the molecules close together.

You need to know the fractions and their uses:

Hydrocarbons are molecules that contain hydrogen and carbon atoms only. There are 3 types that you need to know for L.C. chemistry: Alkanes (all single bonds), Alkenes (at least one C=C double bond) & Alkynes (CC riple bond).

These are saturated (contain only single bonds) hydrocarbons and are the simplest homologous series. Importantly they make up the backbone of most organic molecules (as most molecules will have at least one other functional group).

All alkane molecules follow the general formula. It can be seen that each successive member has an extra CH2 group. This has implications for the size of the molecule and for physical properties like boiling point. A bigger molecule means more points of contact and so stronger overall Van der Waals forces of attraction, leading to a higher boiling point as the chain length increases.

Most organic molecules can trace their roots from crude oil, and ethene is no different. Catalytic cracking of longer chain molecules isolated from fractional distillation of crude oil  can produce ethene.

It can also be made synthetically from the dehydration of ethanol using  aluminium oxide as a dehydrating agent. This is a popular question on L.C. chemistry. Glass wool is also used to absorb ethanol. Once heat is applied ethanol vapour gets passed over the catalyst and dehydrated. This is an example of an elimination reaction.

N.B.: Test for unsaturation: bromine water (orange colour) is added and this turns colourless when an alkene is present.

The two covalent bonds in the double bond are formed from a different orientation of orbital overlap. One of the bonds (sigma bond) arises from a head-on overlap of orbitals which results in a very strong covalent bond. The other bond (pi bond) however arises from a side-on overlap of orbitals (hybridisation is not covered in LC chemistry). This weaker bond results in the chemistry that they undergo, i.e. Addition reactions. 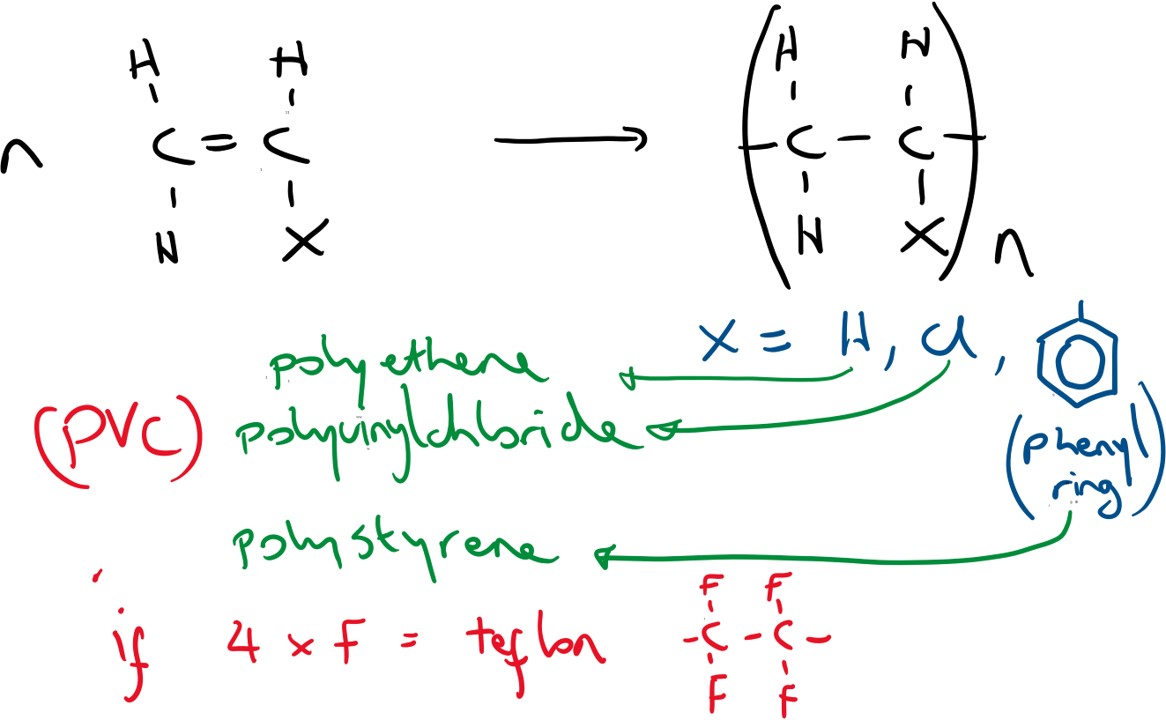 While not on the course, the last point to mention about alkenes is the fact that you can get geometrical stereoisomers. Stereoisomers are molecules whose atoms are connected in the same way but have a different arrangement in space. Geometrical ones have groups attached to different sides of the double bond. e.g.:

Alkynes are hydrocarbons that have a carbon-carbon triple bond. The only one on the L.C. course is the first member, ethyne, also known as acetylene. The formation of ethyne from water being dropped onto calcium carbide is a popular question.