A hugely important class of compounds, it is important to know how to make the most common alcohol, ethanol,  and understand some of its reactions. There are two common methods of formation. The quickest and most efficient is the hydration of ethene, where water is added to ethene using an acid catalyst (phosphoric acid usually).

The other method and more common from an alcohol production point of view is the anaerobic respiration (fermentation) of glucose, producing carbon dioxide and ethanol. The yield of ethanol is low but this brewing method is more sustainable as glucose comes from plant material, whereas ethene is usually generated from crude oil.

The alcohol functional group is represented by  where R is a generic group, usually representing an alkyl (alkane) chain: . The naming system for the first two members of the homologous series is fairly standard:

but we need to classify alcohols into different types when we get to 3 carbons: 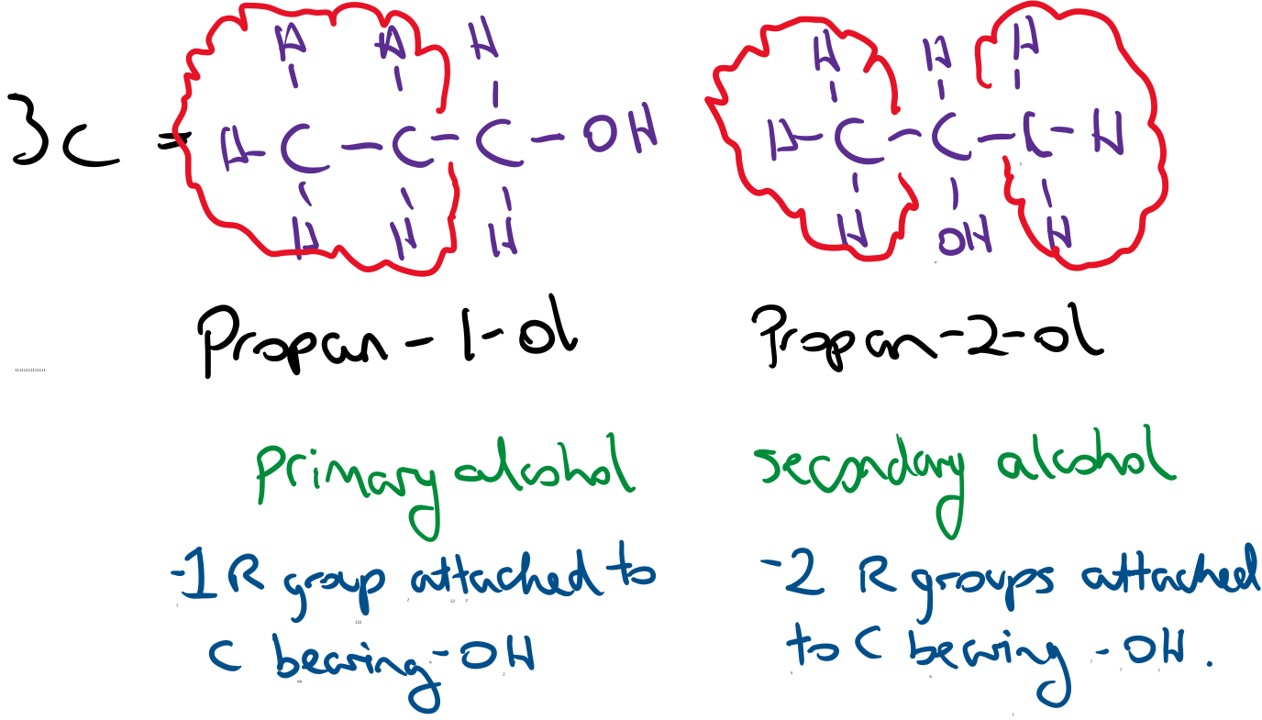 A third classification comes in when we look at an isomer of butanol:

Boiling points,  which are directly related to the strength of the intermolecular forces, are relatively high for low molecular weight compounds, due to the strong hydrogen bonds.

H-bond is an electrostatic attraction between an electron deficient hydrogen atom (one bonded to a suitably electronegative element, only nitrogen, oxygen or fluorine) and the lone pair on another atom, usually nitrogen, oxygen or flourine. This intermolecular attraction is far stronger than Van der Waals forces and is the reason that alcohols have reasonably high boiling point. As the chain length of the alcohol increases then the boiling point will also slightly increase as there are more Van der Waals forces of attraction.

Small chain alcohols are very soluble in water as both interact well via hydrogen bonds (caol le caol agus leathan le leathan; like dissolves like). As the chain length increases then they become less soluble as the non-polar alkyl chains don't interact well with the polar water molecules.

The only reactions that are necessary to know for L.C. chemistry is the reaction with an acid to form an ester in a substitution reaction (see ester section below), the dehydration of an alcohol to from an alkene in an elimination reaction (see alkene formation) and the oxidation of alcohols to formaldehydes, ketones or carboxylic acids.

Oxidation will happen if there is a hydrogen atom attached to the carbon bearing the OH group.

As the oxidising agent above is a dichromate ion, it has an orange colour, as it oxidises the alcohol, it itself gets reduced to chromium ions which are green. So the colour change for the reaction is orange-> green (note the counter ion 'Na'  in 'Na2Cr2O7' above is irrelevant, it could also be 'K').