Free radical substitution. This is one of the two mechanisms you are required to know for L.C. chemistry (the other is electrophylic addition to an alkene). A mechanism is a sequence of steps that show the movement of electrons between atoms.

To make new bonds, usually, older covalent bonds need to be broken. They can either break by one of the atoms accepting both of the electrons (the more elctronegative atom will take the electrons) which is known as heterolytic fission.

Homolytic fission is where there is an even breaking of the covalent bond in which both atoms regain one electron to form a species known as a free radical.

The following is the mechanism for the free radical substitution reaction of methane with chlorine. (Note: only the purple depictions below are necessary for LC chemistry, the orange writing is an aid to understand what actually happens).

It starts with an initiation process where by ultra-violet (UV) light causes a chlorine molecule to split apart by homolytic fission.

The chlorine radical then extracts a hydrogen atom from a methane molecule, forming a new H-Cl bond and breaking a H-C bond to from a methyl radical.

The methyl radical then reacts with an chlorine molecule to reform the chlorine radical (chain process as the radical is reformed) and the chloromethane product.

There are three potential termination steps; essentially a radical must react with another radical so that no new radical is formed. 2 things are worth noting here.

2) The presence of tetra-methyl lead (not shown) or tetra-ethyl lead speed up the reaction by providing extra methy/ethyl radicals. 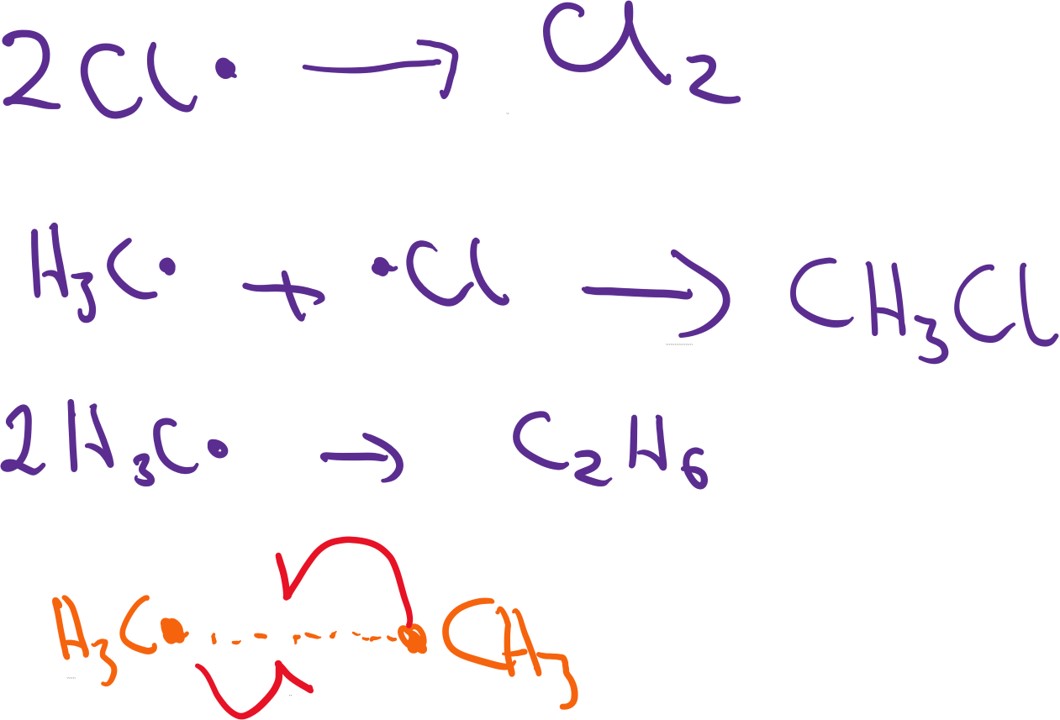 The next mechanism involves heterolytic fission of a covalent bond in an electrophilic addition mechansim.

At first, the rich electron density on the alkene double bond, induces a dipole in the bromine molecule (see below). The alkene then reacts with the partially positive bromine causing the Br-Br bond to break. The pi bond in the alkene is weaker than the sigma bond (side on overlap of orbitals rather than head on overlap).

There is debate as to the best way to represent the mechanistic approach to form the brominium ion intermediate (the orange dotted line from the bromine to the carbon need not be shown). The bromide ion then attacks the carbon bearing the brominium ion forming a new covalent bond. (terms - nucleophile and electrophile are not specifically on the course).

You will get marks for drawing the carbonium ion (acceptable method) which then gets attacked by the electron rich bromide ion.

In fact, this may be easier to remember as it is also used in the addition of Hydrogen bromide to an alkene.

N.B.: if the alkene is unsymmetrical then the carbocation (C+) forms on ion the carbon atom that has the larger number of electron rich atoms (i.e. non-hydrogen atoms for simplicity). eg 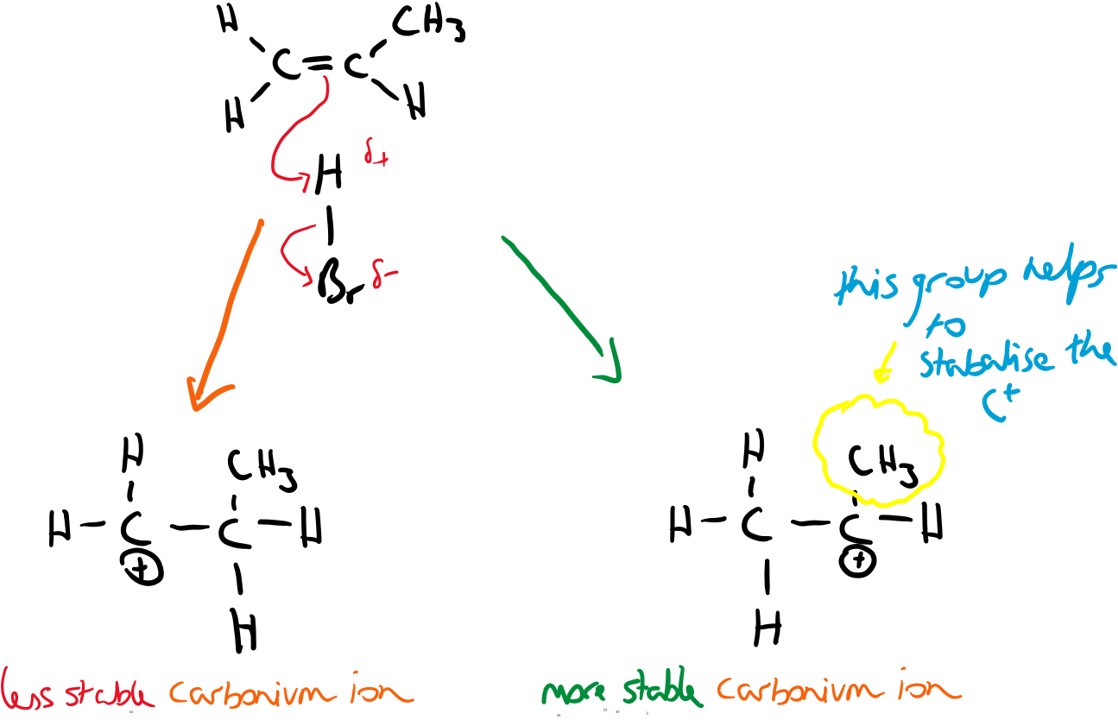 While both electrophilic additions are possible, the more favoured product is always the one that has the more stable carbocation and so the bromide ion reacts there (Markovnikov rule).